Joint company golf days are always amongst the liveliest events on the Tour with an added level of banter and rivalry, each team boasting they have the best players out on the course. They also provide a great opportunity for networking in a wider circle, with more people, talent, businesses and clients to find out about. 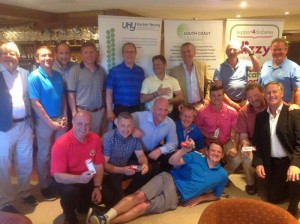 We’re pleased to say, that the recent UHY Hacker Young and uPhotogifts company golf day on Tuesday 21st June at Piltdown Golf Club was just the same, full of both opportunity and fun – on and off the golf course.

Phil Hawkins (Total Print and Display) was the best player out on the course, with South Coast Golf Tour season ticket holder Bob Grace (WPA Healthcare) coming a close second  and uPhotogifts’ very own Tsolag Keoshgerian finishing up the top 3. However they didn’t have the drive or skill that day to perform best on the hardest hole in Sussex, the 4th hole. That prize went to both Peter Sebry (Taylor Wimpey) and Stuart Jefford (H B Ingredients) – well done guys!

With just three rounds to go, take a look at the order of merit as it stands, and see all the results from Piltdown here.

Looking forward to round five

On Friday 12th August it will be time for the annual charity golf day to support local charity, dizzy: support for diabetes. Round five of the 2016 South Coast Golf Tour will take place at Hill Barn Golf Club – don’t miss the chance to support this great cause!